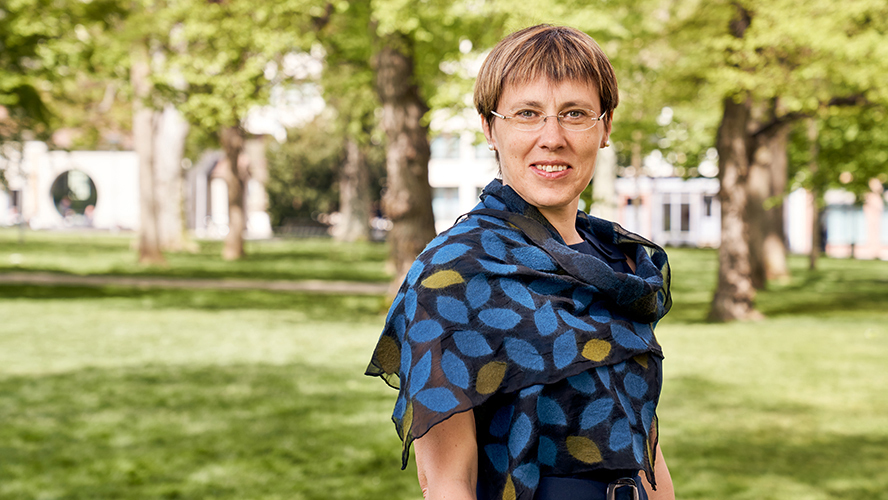 Prof Viktoriya Sereda studied in L’viv, Budapest and Edinburgh and obtained her doctorate in 2006 with a study of the influence of regionalism on the formation of sociopolitical identity in Ukraine. She has served as Professor of Sociology at the Ukrainian Catholic University in L’viv since 2015. She was recently the MAPA Research Fellow at the Ukrainian Research Institute at Harvard University, where she used sociological data to develop a digital atlas of social changes in Ukrainian society.

The fate of the approximately two million internally displaced persons (IDPs) as a result of the war in eastern Ukraine is only slowly beginning to capture the attention of social scientists. When it does turn to these issues, migration research concentrates primarily on IDPs as passive victims and those who suffer as a result of the war.

In her current research project “The power of the disempowered: civic activism of Ukrainian IDPs”, Prof. Viktoriya Sereda, our eighth URIS fellow, shifts the perspective and looks at the agencyof the Ukrainian IDPs. To what lengths do they go to become integrated in their new environment? How do they manage to draw strength from their own experience of displacement and flight for civic engagement? Viktoriya Sereda’s interview-based research is situated at the interface of the sociology of everyday life and the history of identity. She addresses one of the greatest challenges Ukrainian society has faced since the outbreak of the war in the east of the country.

The portal "Uninews" of the University of Basel reported on her current research with a detailed interview.

In her course “Migration and belonging. Ukraine in glocal perspective after 1991” at the University of Basel, Viktoriya Sereda invites students to examine selected Eastern European migration processes and debates on belonging, multiculturalism, and integration, with a special focus on the case of Ukraine. For the last decade Ukraine was among the top ten countries suppling highest number of migrants in the World. Not less important are internal migrations that were often caused by military conflict and violence, and became a key factor of societal transformations as well as discussion on belonging. Another important theme of the course is the impact of migration from Ukraine and Eastern Europe on European and American history, and on the current global trends. Therefore, the course participants will engage in the interactive collaborative discovery of several key problems such as Ukraine’s place in the care chain, gender aspects of migration, trans-Atlantic intellectual migration, global diasporas, migrants as important transnational development agents, artistic representations of migration, the challenges of the COVID-19 pandemic.